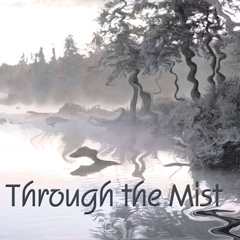 Through the Mist was written for colleagues at Information Resources, the company where I worked back in 1992. Three people (flutist, violinist, guitarist) organized a trio to commission this work as part of the company’s Christmas auction for charity. In the auction, the trio bid the price up (makes sense that no one else wanted it) and paid the commission fee to their favorite charities.

The imagery for the music is the lake in southwestern New Hampshire where my father built a cabin 40 years ago. The titles came after the music, as I make the connection to some part of my life.

Ashuelot Sunrise (1st movement – listen) is a rhapsodic cadenza for three. Shifting rhythms and rubato keep the music from settling into a regular pulse. I’ve often watched the mist as it evaporates under the warmth of a rising sun. It’s a time to listen for loons and avoid rippling anything that would stir the complete tranquility.

Rocky Shore (2nd mvmt listen), is more austere and hesitant, with a knocking motive. The lake is not too deep; it was created by damming the Ashuelot River in the late 1800s I think. Most of the shore is rocky and steep, great for exploring in a canoe or cayak as long as the strong midday wind doesn’t blow you onto the rocks.

Nocturne (3rd mvmt – listen) feels to me like a romantic, tropical song. A friend questioned that, didn’t hear the “tropical” part; there’s no Latin rhythms or anything. The music sets me thinking of warm, languid summer nights – doesn’t matter where.

In the original version the guitar part was rather difficult. It could be hard to hear the guitar with the other instruments. So, since I like to write for harp, and the Lexington Symphony Chamber Players have just this trio — flute, violin and harp, I made the adaptation. I knew, though, that harp has its own limitations. The chromatic music of Mist was challenging to map onto the harp’s available notes. The melodies often alternate between major and minor, which for the harp, means constant pedal changes. So that had to be altered to make the harp music flow smoothly.

I’m very happy with the result.

In May Liz, Danielle and Barbara will be doing the concert premiere of this version. May 5 in Acton, MA and May 19 in Cohasset, MA. Get info on the Spindrift concert calendar.

Update: The recording of Through the Mist is now on the same-named CD, released in February 2015 on Ravello Records.

You can buy the sheet music for Through the Mist in the Spindrift store.

One thought on “Through the Mist, musical rhapsody of New England lake”