Each of the four parts are meant to be doubled, but only Mandolin I requires 2 players. The other parts have occasional divisi and can be covered by one player if necessary. The mandola part is provided in treble clef (notated an octave higher) and alto clef. Some double-stops and chords are notated divisi. If there is only one player on the part, he or she can try to cover both if possible. Double-stops that are not marked divisi can be played either way.

There are three movements:

Loosely Blue is dedicated to Marilynn Mair, superb mandolinist and teacher at Roger Williams College in Rhode Island, and her ensemble Enigmatica, a group of skilled mandolinists, amateur and professional, from Massachusetts and Rhode Island.

Enigmatica recorded the last movement, Blue-Gold Variations, on their debut CD. For more about Mair, Enigmatica and the CD, click here or visit http://www.marilynnmair.com/

“The music of Loosely Blue is inspired by folk music. The shape and tonalities of the melodies and the structure of the phrases remind me of our various ethnic musics, but nothing is explicitly derived from a particular culture.

“Prelude starts with an atmospheric tremolo and gradually introduces its syncopated, unevenly accented melody. The second movement Mirage recalls the augmented intervals of Middle Eastern music. The middle section, marked misterioso, starts as a dialog between the first mandolins and mandocello. All the instruments join a unison climax, followed by a return to the more mellow music of the beginning.

“Blue-Gold Variations combine two melodies: a simple pentatonic phrase and a widely spaced languid bluesy tune. After several variations on the bluesy second tune, the pentatonic tune from the introduction returns and energizes the languid quality of the second tune. The resulting energy propels the music forward so that it is really galloping along by the end. I sometimes describe it as dueling variations, but maybe it’s more that each tune eggs the other on in a complementary way.”

Be the first to review “Loosely Blue” Cancel reply 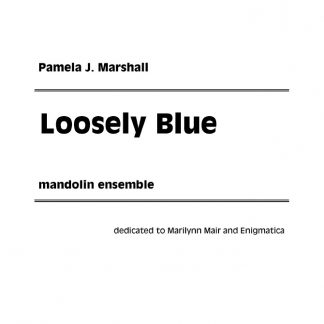