for solo flute, clarinet or saxophone

Whisper Solos is a set of variations on a 30-second solo called Whisper. Whisper was meant to be played in an elevator, hence the need for quiet music. The theme is a cascade of notes, played like the wind. The variations simplify the music, rather than elaborate on it, until the final staccato variation.

Whisper Solos can be played by any agile treble instrument. The performer should play the music as written, in the transposition of your instrument.

There are five short movements. Play the music as written in the transposition of your instrument.

Whisper I was originally written for a contest that requested a 30” solo. It would be played in a glass-enclosed elevator overlooking a beautiful space somewhere in Sweden. The music would be played for the duration of the elevator ride. It also had to be soft — no harm should come to anyone’s ears in such a small space — hence, music that is a whisper, gentle as a breeze.

I liked my material, even though it didn’t win, so I made additional versions of the solo. Whisper II eliminates a lot of the filigree to find the core pitches of the line. Whisper III starts with that simplified phrase, pivots in the middle and does the phrase backward. Whisper IV also simplifies the melodic line in different ways. Whisper V strays the furthest from the original material, but the contours of some gestures can be traced back to Whisper I.

Be the first to review “Whisper Solos” Cancel reply 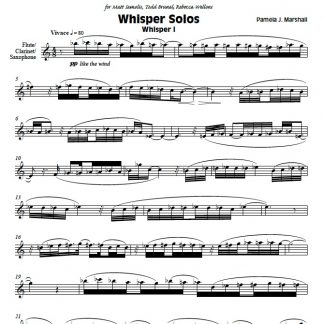