Echoes of Golden Brass, music for eight horns and organ, has a nostalgic quality. The music begins with a muted concert C in one quartet, punctuated by the others and leads to a dialog between horns and organ. A lilting 3/4 section with an organ ostinato has a pastorale quality. A plaintive tune in the organ interlude leads to a fanfare motif that sounds first in the distance and gradually builds to include all the horns. A final section uses a snappy fanfare motif to build to a climactic ending. Throughout, the two quartets of horns alternate taking the lead.

The horn players should be seated in two sections with a small separation between them, 1-4 on one side and 5-8 on the other.

Echoes of Golden Brass is based on several short fanfares I wrote in 2003, which appear one by one in the second half of the piece. The sound of the horn is by nature resonant, rounded and nostalgic. You have to work to make it sound modern. The organ is also an old instrument with a lot of historical resonance. So one meaning of my “Echoes” is a rich and resonant echo from the past. In addition, the music itself is full of echoes and imitation between the two quartets of horns, punctuated by the organ as it adds a pastoral interlude or an emphatic phrase. This music is dedicated to Esprit de Cor.

Listen to an MP3 excerpt of Echoes of Golden Brass. In this live performance, the horns had a hard time tuning to the low-pitched organ. This approx 1-minute excerpt begins at m.88.

Be the first to review “Echoes of Golden Brass” Cancel reply 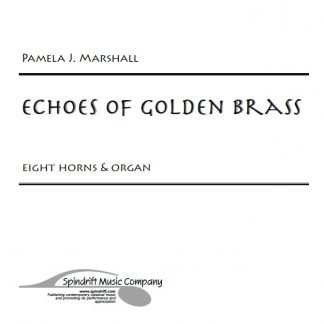 You're viewing: Echoes of Golden Brass $15.00
Add to cart