Examinate Variations originated in a one-minute composition called Examinate for flute, viola and doublebass, which I wrote for a Composer’s Voice project. The little snatch of music had a dramatic shape and many more possibilities, so I decided to treat it as a theme for this set of seven variations. The variations are:

The variation titles illustrate some of the processes. The short Canon starts out at the octave six beats apart, but it slips and slides, both in pitch and distance. In Upside Down, the players move in opposite directions. Sostenuto transforms the essence of the theme into very long notes. In Will o’the Wisp, the music moves in parallel. In Static, I reduced the theme to just rhythms in four different parts, then mapped those four parts onto the two instruments. Slinky is a lazy-jazz ending for the set.

Examinate Variations is a project of the Spindrift Commissioning Guild and is sponsored by a community of new music supporters, with my appreciation and thanks.

I have dedicated this music to the Addington-Barringer Duo: Ashley Addington, flute and Rachel Barringer, cello.

Recording The Addington-Barringer Duo recorded Examinate Variations for the CD Through the Mist on Ravello Records, released February 2015.

Listen on Spotify. The Examinate Variations tracks are at the end.

Be the first to review “Examinate Variations” Cancel reply 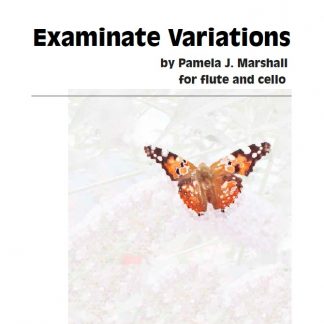