Contemporary chamber music for the rich sound of cello and double bass. Pascal’s Theorems is an intense and virtuoso work in three movements. The basic motive of the first movement is reminiscent of the three corners of a triangle, hence the title. The movements are:

Your purchase includes a score on 8.5×11 paper and parts on 8.5×14 legal-size paper. You may prefer to play from score.

“The idea for Pascal’s Theorems started with a triangle. The three notes of the opening motive are its corners. The first and third movements develop and extend this three-note idea. Both are gestural, aggressive, and full of dynamic contrast.

“In contrast the second movement begins with long unmeasured notes. The tempo is “slow, outside of time”. The score also tells the performers to let each interval settle in, listen to it, then move on. Just as the performers do, the audience can savor each harmony as if they were gazing at and hearing stars in a seemingly unchanging sky.

“When I was writing the piece in 1996, the comet Hyakutake was in the sky, and at the time of the premiere Hale-Bopp was visible.”

Listen to Pascal’s Theorems performed by the Axiom Duo.

Be the first to review “Pascal’s Theorems” Cancel reply 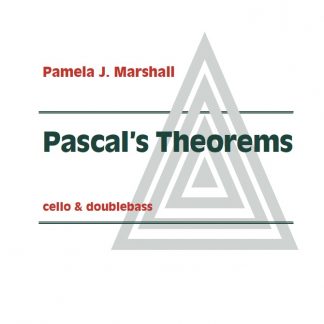