A challenging and rewarding solo inspired by Shakespeare’s Sonnet #5. Jagged leaps and thunderous low tones bring to mind “hideous winter”, and an expressive sighing melody motif longs for summer’s lost beauty. But there’s a lilt to the music that mocks the hideousness.

Massachusetts clarinetist Monica Duncan gave the premiere in January 2008 and wrote the following about the piece:

“Influenced by a Shakespeare sonnet, Pam Marshall’s Summer into Winter highlights both the range and agility of a clarinetist. Although most of this short piece is best executed with a somewhat free sense of time, as indicated by the composer, one section involves a complexity of rhythm that evokes a jazz feel for the performer. Another section, indicated to be played like the wind, is written in an effective range of the clarinet to actually produce some breezy virtuosity. Then there are the accented fortissimo low notes, which call for a definite lack of inhibition!

This piece is really a joy to play because of the way Marshall has created a very idiomatic way for a clarinetist to express both lyricism and technique.”

Those hours, that with gentle work did frame
The lovely gaze where every eye doth dwell,
Will play the tyrants to the very same
And that unfair which fairly doth excel:

For never-resting time leads summer on
To hideous winter and confounds him there;
Sap cheque’d with frost and lusty leaves quite gone,
Beauty o’ersnow’d and bareness every where:

Then, were not summer’s distillation left,
A liquid prisoner pent in walls of glass,
Beauty’s effect with beauty were bereft,

Nor it nor no remembrance what it was:
But flowers distill’d though they with winter meet,
Leese but their show; their substance still lives sweet. 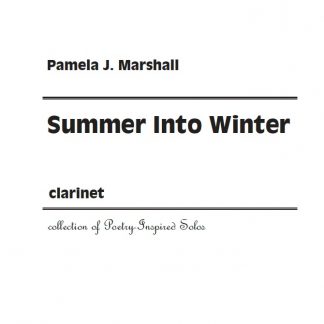 You're viewing: Summer into Winter $5.00
Add to cart