Wanderer is contemporary chamber music for brass quintet. The music is dramatic and rhythmically intricate, for advanced players. Each player takes the lead at some time in the piece. Contrapuntal lines weave through the voices echoing the music’s main motives. For quintets with tuba, rather than bass trombone.

“Wanderer’s thematic development is based on echo and imitation. There are three major sections. I based the first section on a noble theme, broad and cantabile. The theme is introduced in octaves and later played in canons at the unison, the melody weaving back and forth among the instruments. The second section begins with staccato repeated notes, marked risoluto. The music builds twice to a quintuplet of climactic

“Each instrument plays independently, meeting the others at cadences, sometimes paired in syncopated rather than unison rhythm. The section ends in a pulsating pyramid texture that keeps growing again from the bass until we hear the climactic quintuplet chords once more. The third section begins with solos and duets for trumpet, trombone, and horn. A lilting coda, a graceful but spare minuet, ends quietly. The wanderer disappears in the distance.”

Be the first to review “Wanderer” Cancel reply 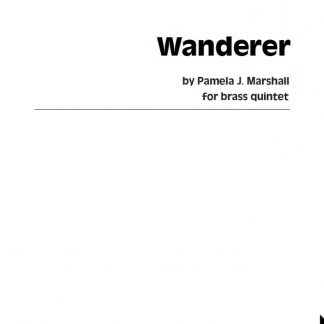