Years ago I wrote music for The Tempest and it remains my favorite Shakespeare play. Recently I was inspired to look back at the texts and write songs for more skilled classical singers that would still be usable in a theatrical production.

Versions for high voice and medium voice are in one book.

The pair of songs are:

The texts are from The Tempest by William Shakespeare Act I, Scene ii.

Scene overview At Prospero’s bidding, Ariel torments the shipwrecked Ferdinand with reminders of his drowned father while Prospero and Miranda watch and study his reactions. Ferdinand is the first young man that Miranda has ever met and she is ready to fall in love, as her father has planned. The texts are the songs Ariel sings to taunt Ferdinand.

Full fathom five thy father lies;
Of his bones are coral made;
Those are pearls that were his eyes;
Nothing of him that doth fade
But doth suffer a sea-change
Into something rich and strange.
Sea nymphs hourly ring his knell:
Ding-dong.
Hark! Now I hear them –
Ding-dong bell.

Come unto these yellow sands,
And then take hands.
Curtsied when you have and kissed
The wild waves whist,
Foot it featly here and there;
And, sweet sprites, the burden bear.
Hark, hark!
Bow-wow!
The watchdogs bark.
Bow-wow!
Hark, hark! I hear
The strain of strutting chanticleer
Cry cock-a-diddle-dow. 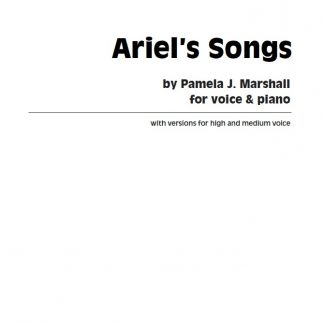