This contemporary flute solo is expressive, rhapsodic, and fun to play. According to Susan Jackson who played the premiere, Communing with Birds is very idiomatic for the instrument. There are no extended techniques. The music is an opportunity to display your musicality.

I’ve been watching birds for years and have tried to train my ear to recognize different bird songs, but I don’t try to transcribe them exactly. This piece has many musical gestures that have the shape of bird song. The idea of this piece is my image of a flutist at dawn in a local woods or distant rainforest, having a conversation with the resident birds.

The music of Communing with Birds for flute was inspired by my trip to the bird-filled mountainsides of Costa Rica. I recorded the bird sounds while I was there and have also made a meditative birdscape CD called Costa Rica Soundscape.

Recording Susan Jackson performs Communing with Birds on the CD Through the Mist on Ravello Records.

Be the first to review “Communing with Birds” Cancel reply 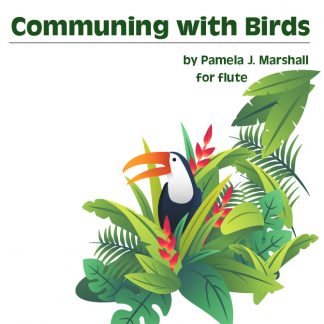 You're viewing: Communing with Birds $6.00
Add to cart