I described the piece this way when I delivered it to Grant:

“The motivic idea that I focused on was the repeated concert G, the home pitch to which the music frequently returns. Then there’s the idea of the gently descending line, in soft triplets and a quicker rising arpeggio.

“I waffled on adding expression marks. At first, I was going to leave it more open, but then it became clear to me that I was hearing specific dynamic-level moments. Altogether, though, interpret freely, molto espressivo throughout. You’re allowed to amend dynamics if you find a phrase shaping that you like better.

Duration has ranged from 7 to almost 9 minutes

NATURAL HISTORY
by E.B. White, sent to his wife in a letter
and published anonymously in 1929

The spider, dropping down from twig,
Unwinds a thread of her devising:
A thin, premeditated rig
To use in rising.

And all the journey down through space,
In cool descent, and loyal-hearted,
She builds a ladder to the place
From which she started.

Thus I, gone forth, as spiders do,
In spider’s web a truth discerning,
Attach one silken strand to you
For my returning.

Be the first to review “Returning” Cancel reply 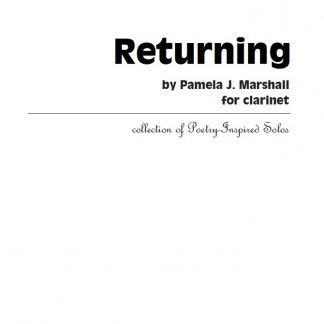