I originally wrote Turbulient for the Vox Novus-Composer’s Voice 15-Minutes-of-Fame project in 2011. Clarinetist William Bruce Curlette called for 1-minute pieces that could use extended techniques. It wasn’t selected, perhaps because, to play it with appropriate expression, it really had to be longer than one minute.

Since then, I have rededicated the piece to my great clarinetist friend Todd Brunel, who saw that the piece really needed to be 2 minutes long and made me a fine recording of it. The ever-changing, restless surface of the ocean was in my mind as I wrote Turbulient.

Quartertone and multiphonic fingerings are from “The Clarinet of the Twenty First Century” by E. Michael Richards. First, I wrote the music. Then I spent some time researching quartone fingerings and replacing the original idea for multiphonics with actual multiphonic specifications.

Listen to a live performance of Turbulient, played by Todd Brunel, streaming hosted by SoundClick.

Be the first to review “Turbulient” Cancel reply 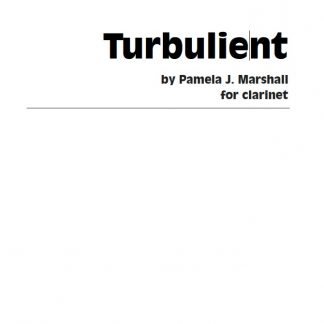 You're viewing: Turbulient $5.00
Add to cart