Sunrise on the Hills

Sunrise on the Hills, a contemporary solo for horn alone, is inspired by the similarly named poem by Henry Wadsworth Longfellow. The poem describes the village bell and the “wild horn whose voice the woodland fills” and sounds echoing through a bucolic valley.

Some of the passages are challenging, but the range is not too high in this solo, going up to an A-flat.

This is the second piece that I’ve gotten from the imagery of Henry Wadsworth Longfellow’s early poem “Sunrise on the Hills”. It appears to me to describe the hills and valleys of some central New England landscape, maybe the Berkshires in the west where I grew up. Not all the stanzas speak to me, but the line “wild horn whose voice the woodland fills” became the name of a piece for 8 horns I wrote in memory of a fellow horn player who lived in the rolling hills around Harvard, MA, home of Fruitlands, of transcendentalist renown.

Listen to a recording by the composer, who happens to play horn:

Excerpts
I stood upon the hills, when heaven’s wide arch
Was glorious with the sun’s returning march,
And woods were brightened, and soft gales
Went forth to kiss the sun-clad vales.

The clouds were far beneath me; bathed in light,
They gathered mid-way round the wooded height,
And, in their fading glory, shone
Like hosts in battle overthrown.
…

The veil of cloud was lifted, and below
Glowed the rich valley, and the river’s flow
Was darkened by the forest’s shade,
Or glistened in the white cascade;
Where upward, in the mellow blush of day,
The noisy bittern wheeled his spiral way.
…

Then o’er the vale, with gentle swell,
The music of the village bell
Came sweetly to the echo-giving hills;
And the wild horn, whose voice the woodland fills,
Was ringing to the merry shout,
That faint and far the glen sent out,
Where, answering to the sudden shot, thin smoke,
Through thick-leaved branches, from the dingle broke.
…

Be the first to review “Sunrise on the Hills” Cancel reply 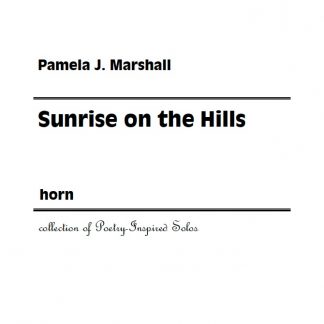 You're viewing: Sunrise on the Hills $5.00
Add to cart